Roger Beedon was drafted by the Montreal Canadiens in 1986. He played collegiately at Ohio State, then professionally for the Port Huron Border Cats of the CoHL/UHL. Roger’s son Brady, though, preferred football, basketball and baseball. “It may have also helped that my mom liked the warm gyms and the lower price tag on other sports too,” Brady jokes.

The senior Beedon’s hockey influence wasn’t completely lost on his son, though. Brady is one of the two new play-by-play voices for the Motor City Rockers. 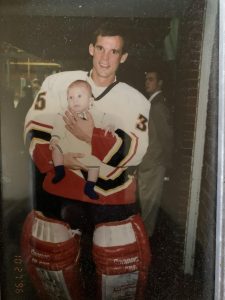 Beedon credits his father for letting him forge his own path. “All the credit in the world to my dad. He never tried to force hockey on me and supported whatever sport I was trying at the time. Despite the fact that I never played hockey, I always would go to games with my dad, basically from birth (pictured).”

The Rockers opportunity arose in quite a roundabout way. They planned on being an expansion team for the 2020-21 FPHL season. Beedon interviewed for the broadcasting position and was told the job was his. The team, though, never got off the ground that season. Fast forward to this year, where Beedon picks up the story.

“I am just a fan at a Port Huron Prowlers game — another team in the FPHL — and I am introduced to the ownership group looking to revive the Rockers brand and take over. I spoke to them about the possibility of being a part of their broadcast team. I also formally applied when the posting came to me in an STAA Jobs Leads+ email.”

After what Beedon calls “a pretty informal process,” he ended up as a part of the broadcast team alongside Ben Szilagy.

Beedon joined STAA after graduating from Wayne State in 2020. “I found STAA through sheer luck of Googling and searching for job openings right out of college. STAA was the only place that seemed to have legit, relevant job leads,” he recalls. “It has also helped me polish my craft through the group critiques that are offered.”

Like his dad, Beedon was a standout athlete — a former fullback at Wayne State University in Detroit. While Beedon is new to Rockers hockey, he isn’t new to sportscasting. He’s the analyst on Wayne State football broadcasts and a fill-in for volleyball and women’s basketball. He also broadcasts St Clair County Community College volleyball, men’s & women’s basketball and high school football, basketball, baseball, and softball.

“I like to have a diverse skill set,” Beedon explains. “I don’t want to pigeon hole myself into just one or two sports, so the opportunity to resume doing professional hockey, and one close to home, was one I wanted to jump on.

“I hope this is not the last job opportunity I find through STAA.”

I want to be an STAA Member