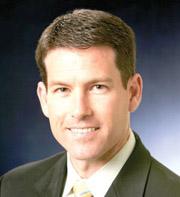 (January 5, 2007) The Milwaukee Brewers have chosen Brian Anderson of The Golf Channel to handle play-by-play duties on the team’s telecasts, according to a story on the Web site of the Sportscasters Talent Agency of America.

Tyler Barnes, a spokesman for the Brewers, declined to confirm that Anderson had been hired by the team. Barnes said the team would make an announcement on Wednesday or Thursday of next week about the hiring.

An MLB.com story posted at the Brewers’ Web site cites an undisclosed source confirming that Anderson was the choice.

Anderson succeeds Daron Sutton, who left the Brewers to become the television voice of the Arizona Diamondbacks.

Anderson serves as a host on The Golf Channel’s tournament coverage, which is at the PGA Tour’s Mercedes-Benz Championship event this week in Hawaii. Anderson could not be reached for comment.

Anderson joined The Golf Channel in 2003. He has no experience calling major-league baseball games. But he began his broadcasting career calling minor-league games for the San Antonio Missions, the Class AA affiliate of the San Diego Padres. He was 22 at the time, the youngest play-by-play broadcaster in minor- or major-league baseball.

Anderson graduated from St. Mary’s University in San Antonio, Texas, in 1993 with a major in English.